Now there’s a saying “If at first you don’t succeed try try again!” I did just that today. This was my 3rd trip out actively fishing offshore on the jetski. Add 2 trips in the Bay to the mix and we have a total of 4 donut trips.

9:30am this morning I crashed my way through the waves on the jetski. Mission was in sight.. Mermaid Reef off Southport. Brisbane/Gold Coast weather had been a bit ordinary lately but today there was a golden opportunity. 10knots predicted for the whole day. I knew if I wanted to go offshore; today was the day.

Punching out through the waves were a bit hairy but manageable. I tailed a big game fishing boat out the spit until we both cleared the rockwalls. The initial decision like always was to try and locate a few livies namely yakas or slimeys and drop them down with a hook on its back. I however only many one yaka and 2 hardie heads before making the final push for the reef.

On arrival there were a few boats drifting over it. I joined in, drifting over it 5 times each time with a different approach. Suspending a yakka under a balloon I varied the depth of my offering with each pass, first 1m above the bottom then eventually almost to the very surface. I could see fish on the fish finder and I even took to cubing over a kilo of diced pillies to entice a hit but no luck.

Around 2pm I looked up to see a flock of seagulls bombing for bait. It was an instant panic. I could see the fish amongst the bust ups. Approaching the first school carefully and quietly I’d set the jetski above the boils and drifted in. There were a few hits as I burned my metal slug through the school…. Then it happened. I actually hooked one! Originally I wasn’t overly optimistic because I had tried this numerous times in the Bay without luck but wowee!!! I actually got one 😂😂 Good little fight ensued with lines peeling off my reel. 5mins later I gleefully netted my first decent fish on the jetski, a lil mac tuna. I gave chase to those bust ups for another good hour and a half before finally giving up and headed in. They only coughed up one fish unfortunately; besides that everytime I approached them they’d dive.

I finished up around 3:30am at Lota St Ramp. Only one fish for the day. On other days out in the bay such a fish wouldn’t have been no big deal but for me after trying so so hard I finally nailed one. For me that was a big achievement in itself and am confident more awesome fish will climb on board in the near future 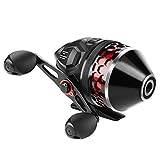