Another fun trip out today on the Nerang River with my mate Michael Pitkin from Alround fishing with Mickey.

Both Michael and I struggled initially for almost an hour. We both stared down the center of a massive donut as the clock ticked away…. however! I was first to set the bar landing a legal bream followed by a few more including a flattie. Michael turns around and goes “legal size”’only… hm… he was still on a donut at the time😂🤣 challenge accepted! Legal it is!

I took the lead the whole day pulling in fish with both zman grubz and bream prawns. Michael was close behind my heels using mostly bream prawns. At one stage I was 4pts, he was 3. Of course, I caught heaps more fish but getting a legal one was proving a little more challenging.

At around 2 pm after ducking out of the howling winds I hooked up to something solid beside a pontoon.

Michael paddled over and witnessed a large flathead being landed. “ I’m done” was his exact words. He literally threw in the towel 😂🤣 I pulled in a 46cm flattie…. and to top it off, almost at the finishing line I hooked on yet again to a freight train at an intersection… wowee it towed me around for a bit until I finally landed a nice GT on 4lb leader. The icing on the cake that one; and one awesome way to walk down the victory isle😂.

Awesome day on the water with a good mate. Michael said he’ll challenge me again next time on “his” home turf at Monterey Keys. Bring it on! 💪😋 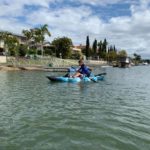 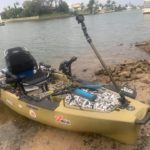 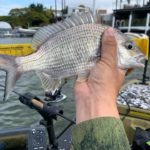 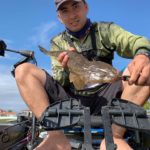 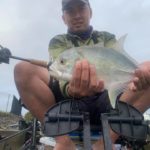 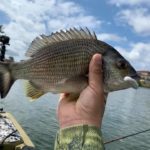 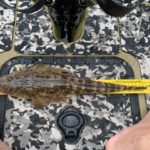 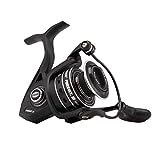