You are here:
Hints and Tips Lures used for fishing freshwater fish are available in various sizes, types, colors and shapes to choose from. The majority of lures made for freshwater fishing are meant for the bass fishing market. However, other fish species such as perch, crappie, northern pike, walleye and muskellunge can be caught using artificial lures.

Whereas some lures are passed by time, starting off as ‘hot’ or ‘new’ and eventually being forgotten, others have stood the test of time. The latter has become popular among anglers for decades. A good fisherman has a large tackle box with all sorts of lure, but know exactly what to use in any given situation.

Here’s a short, but detailed guide on how to choose the right freshwater fishing lure for your unique fishing expedition and the type of fish you intend to catch (you can use a decent fish finder to find them, and if you don’t have one yet, definitely read our top fish finder reviews):

Matching Different Types of Lure to the Right Fish Species

Crank baits are also known as plugs. Made from plastic, the artificial lures are built to be cast out in the waters and then retrieved, hence its name. Some types of crank baits are designed for rapid retrieval to trigger aggressive fish strikes. Despite being weedless, the lures can’t be used around brush, weeds or even timber.

The four types of crank baits include: top water lures such as poppers, wobblers and stick baits for surface water fishing. Unlike stick baits, thin minnow lures (such as Normark’s Rapala) are built with small lips at the front. They’re used for both surface and underwater fishing in a twitching motion.

Swim baits or swimming crank baits move sideways when in use. The Helin Flatfish and Lazy Ike are good examples of this type of crank bait lure. Some variations are curved with a concave or flat head, functioning like the lip on a thin minnow.

Unlike thin minnows, diving lures are made with larger lips for deeper dives during trolls or retrievals. They feature short, thin, long or stocky bodies. Faster retrievals lead to deeper lure dives.

Nick and Cosma Crème invented plastic worms in 1949. They were first introduced into the market in 1951. Made in various lengths and colors, plastic worms are ideal bass lures for catching largemouth bass fish. Ranging in length from 4 inches to 10 inches or 10cm to 25cm, the artificial worms can also lure crayfish, grubs and salamanders, among other spawns.

Plastic worms are often used for surface fishing in brush, timber, weeds and even along drop-offs with rocks. Hooks are threaded through the worms, ensuring they completely cover the hook point during rigging. Therefore, they’re referred to as self-weedless rig. When finished with a slip sinker in the shape of a bullet, it’s known as a Texas rig. However, if finished with a swivel, leader or slip sinker in the shape of an egg, it’s known as a Carolina rig.

Spinner Baits for Conditions Where Other Lures Hung Up

The baits resemble open safety pins, hence are often known as safety-pin spinners. They feature at least one spinner on one end and a weighted hook and skirt on another end. Rapid retrieval of the spinners across the water surface causes the blades to splash and flash. The action ensures the lures drop to the bottom of vertical structures such as drop-offs or even bump off timber standing on its way.

Spinner baits are built with propeller blades or those designed to take the shape of teardrops. The latter come in three types: the willow-leaf (has both ends pointed and narrow); the Indiana (a type of willow-leaf with a rounded end); and the Colorado (a type with a rounded point on one end while the other is end round, but broad).

Also known as a spinner or French is the inline bait. Its body is tubular and metallic with an Indiana or willow-leaf blade spinner and a skirt-feathered treble hook. They’re often used in streams or rocky areas to catch smallmouth bass, trout and walleye.

Julio T. Buel developed the spoon in 1850. He cut the handle off a teaspoon and fixed a hook on it. During retrieval, the spoon wobble sideways to lure fish. Whereas larger spoons are used to catch large fish such as pike, bass and walleye, small variations target smaller fish such as panfish and trout.

Spoons such as Hofschneider Red-Eye and Eppinger Dardevle are mostly designed with a treble hook and a split ring for underwater fishing. The thickest spoons are used like jigs while thick ones are trolled or cast. On the other hand, the thinnest spoons are trolled.

Other spoons feature a single wire-weedless hook for rapid retrieval across the water surface. They’re often covered with bait linked to the hook or a pork rind strip.

Jigs are built with a feather skirt/hair or plastic grub and a weighted-head hook. Although most have rounded heads, some feature triangular or flat heads. The heads keep the hook in an upright position away from weeds and rocks or trigger a swimming motion.

Designed for use in cold or warm water, the lures are often retrieved in an up-and-down motion. The retrieval process slows down as the lure gets to cold water points. They’re built with wire guards or stiff brush for protection from weeds. However, some only come with a hook. Use them near brush, weeds or rocks where they can easily hung up. Jigs are the most cost-effective type of lures on the market.

Jigs with small, grub bodies are rigged using removable safety-pin spinners. A good example is the Bass Buster Beetle Spin used for catching various fish species. Short-distance pitching or flipping is used to catch bass. Lift-and-drop motion slowly lowers and raises the rod during retrieval so the lure drops on a taut line. Straight retrieval causes the lure to develop a swimming motion.

Flies are built with a single feather or hair skirt hook. They’re the smallest and most-lightweight lures used in streams to catch trout. They come with special rods with a monofilament leader attachment for weighted line casting. The lures are designed in various patterns to match the various species of flies that trout eat. You can tie your own flies to ‘match the hatch’.

The five types of flies include dry, wet, nymphs, streamers and bugs. It’s possible to use various types of flies with many hooks at once.  However, the number of hooks you can use at the same time varies from state to state.

Pick the right colors depending on the prevailing water and weather conditions. Choose light colors that mimic natural patterns for use in clear waters during the day. Dark colors are ideal for use in dark or cloudy days and in dirty waters. You can also use plastic worms with a dark color on one end and a bright color on another end for cloudy water conditions.

Pick the right lure size based on the fish species, tackle in use, weather condition and fish reaction. Small lures are ideal for cold conditions while larger lures are recommended for high-wind conditions.

What is the leading cause of death for paddlers in small crafts such as canoes, kayaks, and rafts?
October 14, 2019 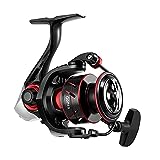